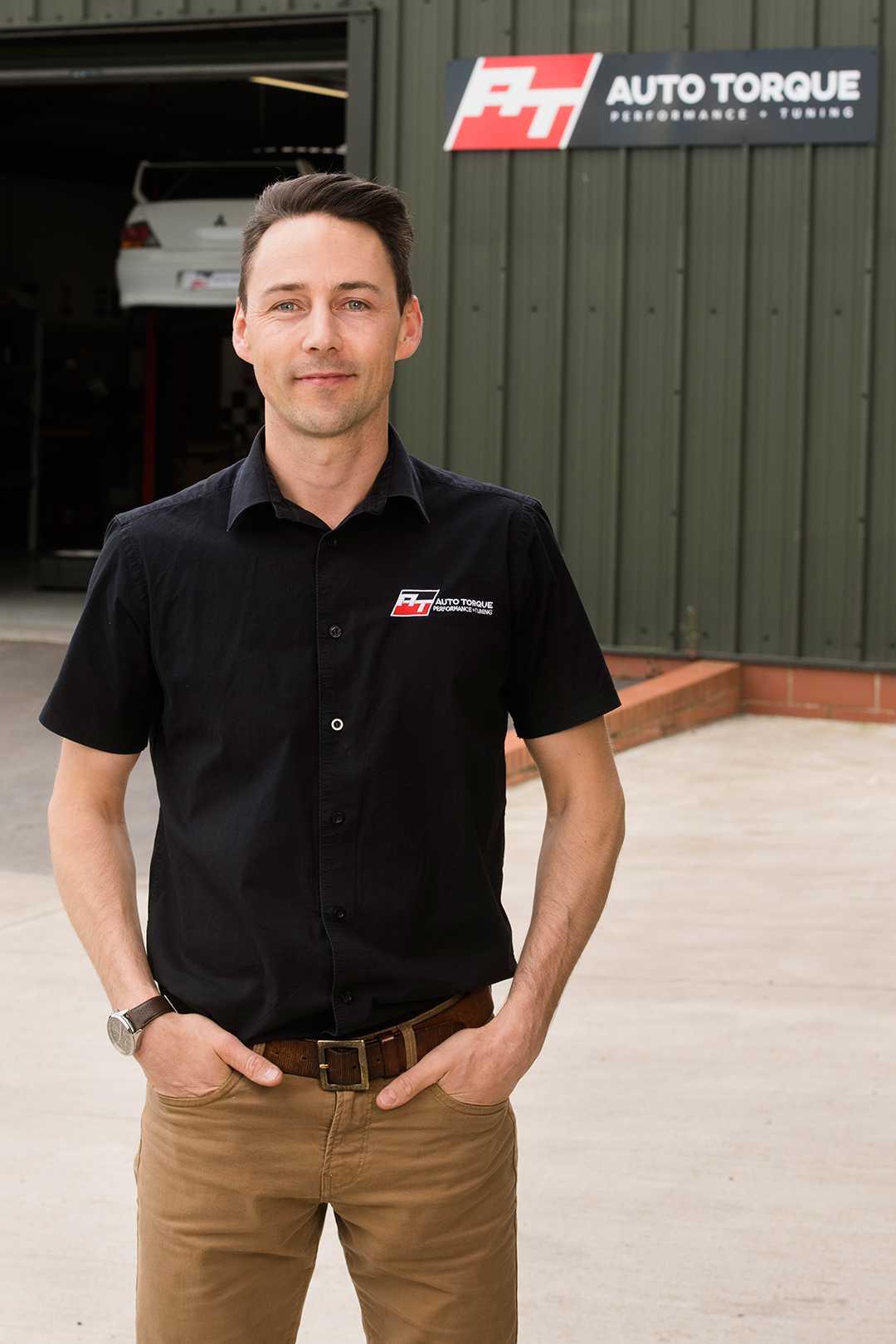 Auto Torque was founded by Chris Marshall during the winter of 2007, from humble beginnings in a small purpose built workshop at the family home. In the days before Auto Torque, Chris’ background included working for various race and rally teams worldwide after leaving university and gaining a degree in Motorsport Engineering. Chris noticed that there was a lack of high quality good value performance car servicing and tuning around the south east UK and decided to offer a service to fill that gap. The business started in small premises with a few customers a week and has now expanded to a purpose built workshop with regular and loyal customers. This is down to Chris and the team’s absolute commitment to high quality workmanship and providing a professional but personal service.

As Service Manager, Paul Mabley manages Auto Torque’s operations. He deals with customers, providing advice and guidance and organising the work to meet and exceed their expectations. With suppliers, Paul is responsible for ensuring both adequate stock of routine service parts, and the sourcing of more exotic items from suppliers across the UK, Europe, USA and Japan, such as Akrapovich, Capristo, Bilstein, and even Nismo. He plans the Technicians’ work schedules, constantly adjusting plans and problem solving with technical staff at all levels.

Paul was previously a customer of Auto Torque, entrusting his RS6 with them. He had his own civil engineering company and explains many parallels with the processes used in the motor industry. A lifelong passion for cars, including Rallying, therefore lured him to his important role at Auto Torque. Paul enjoys developing the skills of both younger people and skilled technicians, through effective training, and he is a firm believer in apprenticeships. It’s clear he is particularly proud of his team.

Beyond the world of four wheels, Paul also enjoys two: Endurance cycling – ultra distance, 250 miles each day for 3 days, sleeping for 9 hours in total, and either riding or eating, or both. From Paris to Brest and back again, day and night, burning 35,000 calories. Paul revels in the sense of achievement, and the opportunity to absorb your surroundings – something you can’t do of course when driving fast on the same roads.

Paul lives in Wescott in Buckinghamshire, very near to Auto Torque, with his wife and two sons – one a fine dining chef and the other doing a vehicle restoration apprenticeship at a heritage skills academy. But thanks to Paul taking them all to watch that Rallying when the boys were young, they are all firm Petrolheads! 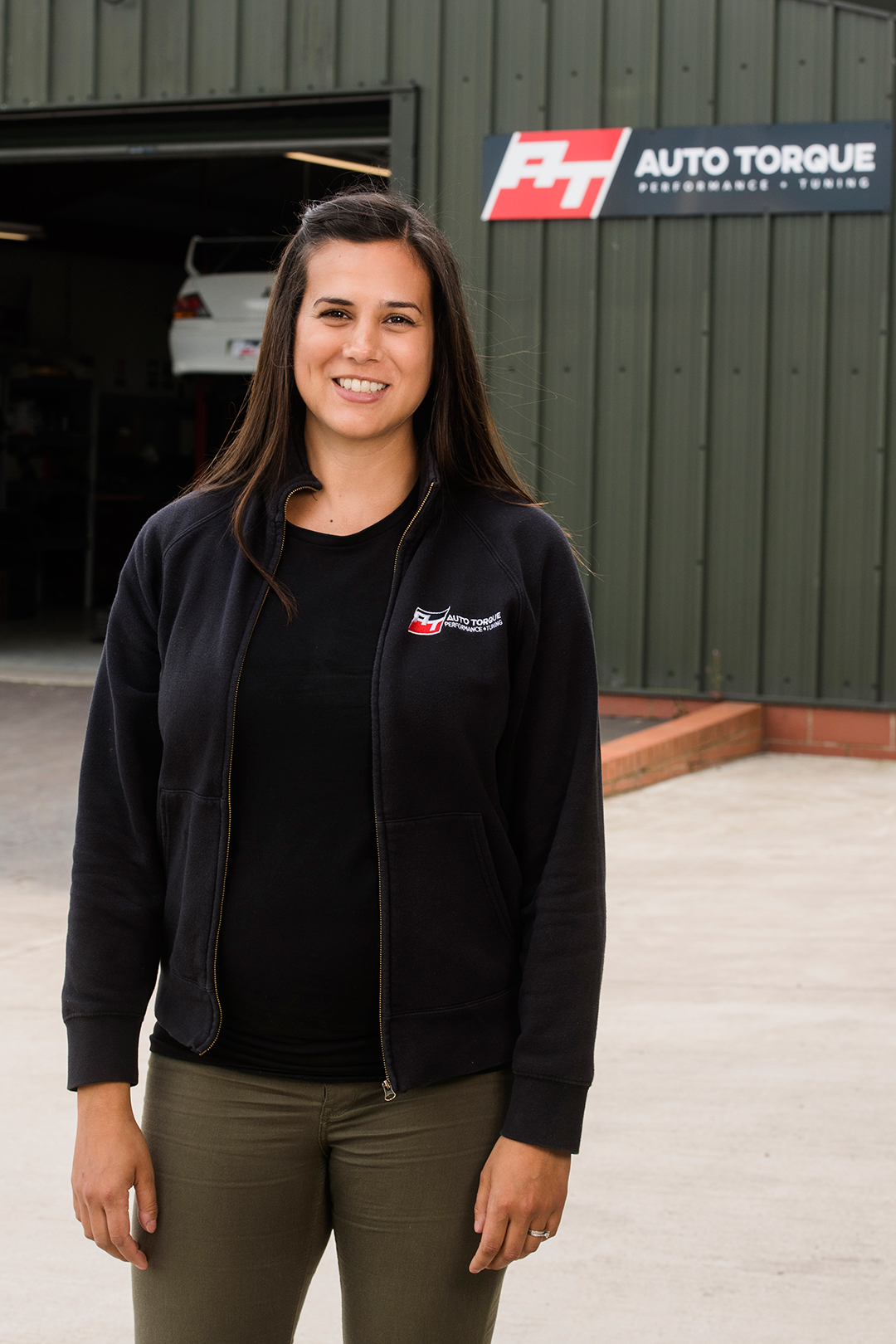 Nadine joined the Auto Torque team in 2018, following a career in various financial and HR positions at a worldwide automotive brand. Nadine is the go to person for any invoice or payment enquiry and is passionate about ensuring the Auto Torque team are looked after from a HR perspective. Nadine can be found in the office most days, along with the office dog, Meg.

Kym join us in the Spring of 2022, to take over from Nadine when she went on Maternity leave.

Kym is the friendly voice you will hear when you call the office to make a booking or enquiry. 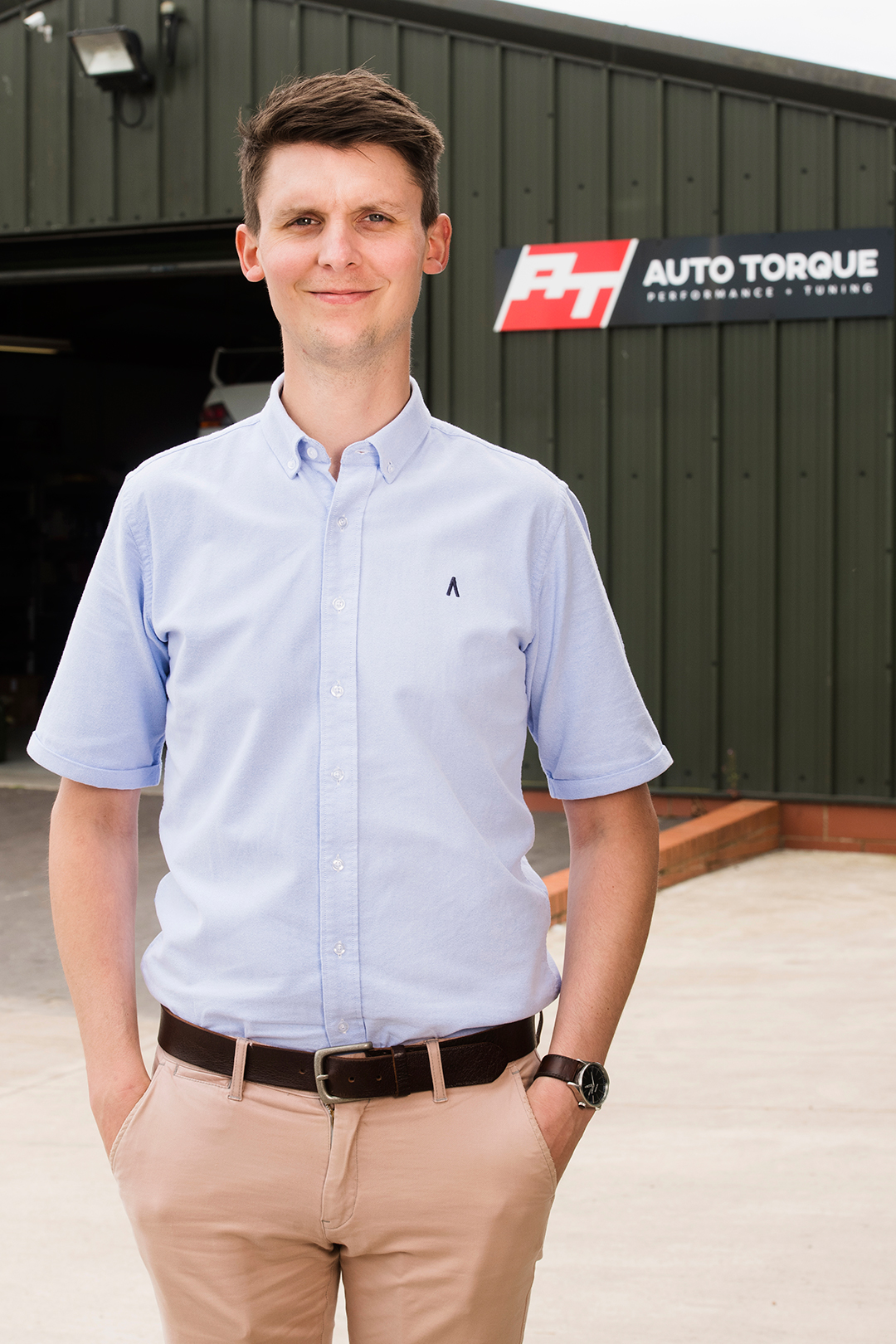 Tom and Chris met in 2004 while working on Mitsubishi Evolution road and rally cars for a firm in the UK. They both then went on to travel with various race teams across the world and Tom returned to join Auto Torque on a part time basis from 2009. Working in the background and helping to develop new ideas for Auto Torque, Tom is also a co-director with Chris in the sister company ATP Cars.

When not at work, Tom can be found on track in his Renault Clio Cup or riding his bike around the lanes of Buckinghamshire. 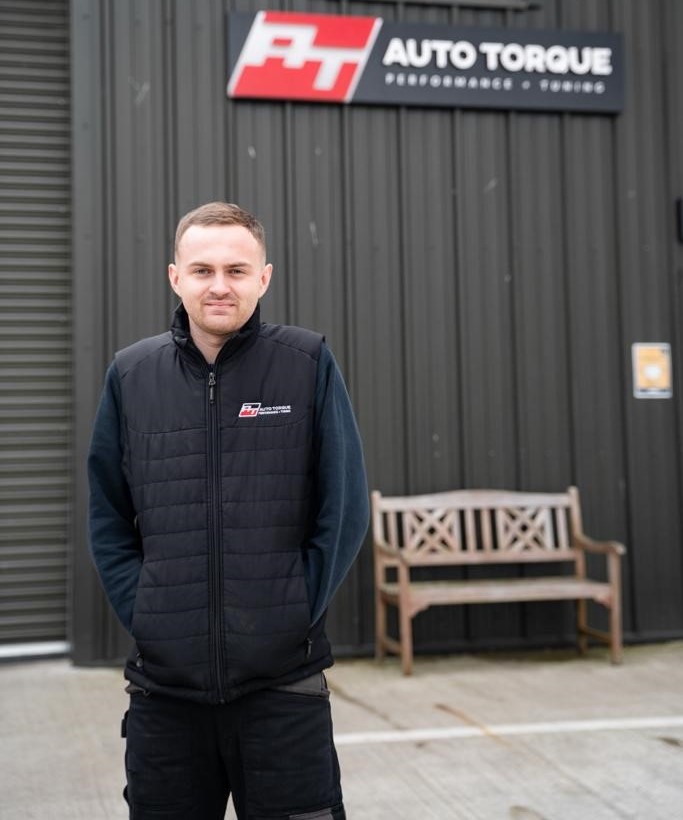 Josh joined the AT team in 2017, moving from a local main dealer and looking for a new opportunity to grow his skill set. Having worked in all departments including service, engine building, diagnostics and upgrades Josh was the perfect addition to the strong team here in Westcott. Josh enjoys attending car shows in his pristine Toyota Celica project car.

Josh  is our Master Technician, with responsibility for AT’s engine builds, tuning and planning the projects which customers increasingly entrust Auto Torque with. Many of them require a lot of thought, communication, and preparation, and often include setting up a dedicated WhatsApp group with the customer, to ensure joint decisions can be made quickly, conveniently, and efficiently.

His top mechanical tip is to do adequate research, joining owners’ clubs, and not automatically choosing either the cheapest or most expensive supplier. He has a keen interest in the software and mapping aspects of tuning, and cautions against owners allowing themselves to be seduced by the clever marketing done, he believes, by far too many vendors. 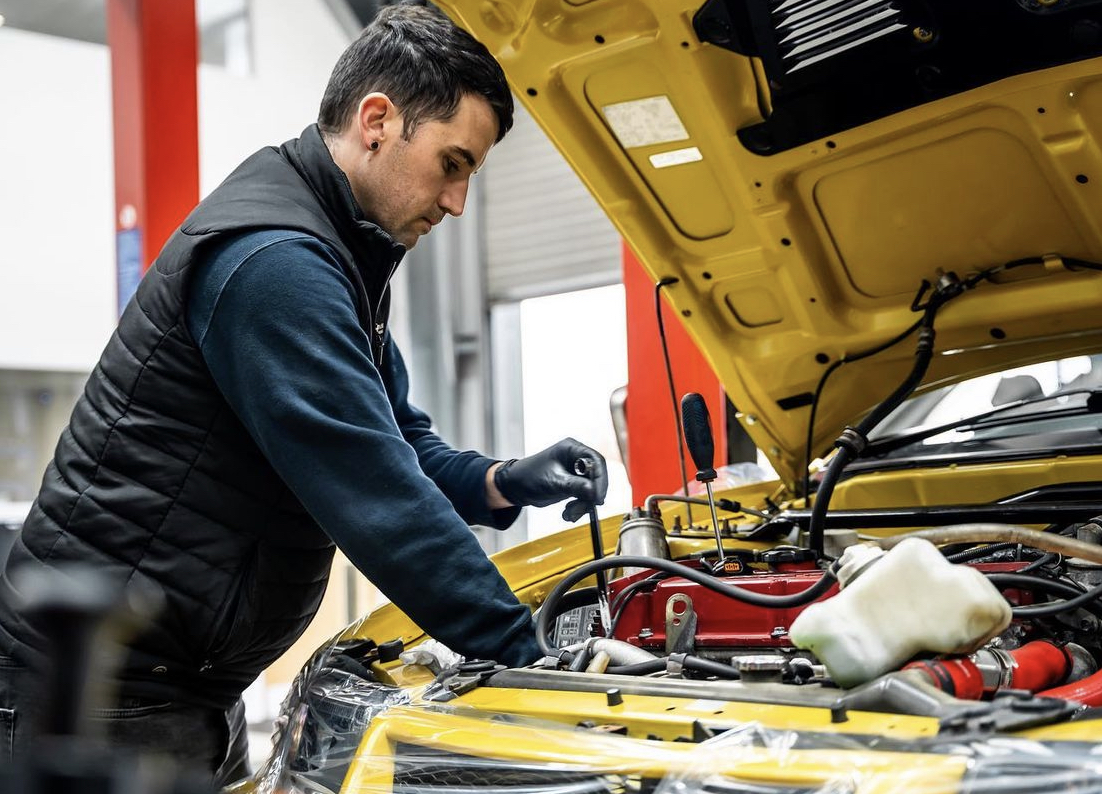 Rainer Burrows is a technician, specialising in the rebuilding of Mitsubishi Evo SST gearboxes, and Nissan R35 GT-R performance upgrades. The SST gearbox is a known weak point on the Evo X, and Rainer’s modifications mean that they rarely fail again, requiring only routine transmission oil changes to deliver consistent, reliable, fast shifts.

His passion led to him opening his own workshop in South Africa in 2013, importing Japanese sports cars, modifying them, and preparing them for his business partner’s Drift racing. It follows then, that his favourite motorsport includes the various Drift Series across the world.

Rainer found Auto Torque when he moved to the UK in 2020. He was living in Aylesbury and researching possible tuners for his friend’s Toyota Supra which he was helping him with. “I liked Chris Marshall and the business, and Chris had no hesitation in kindly offering me a role”. He now lives in Steeple Claydon in Buckinghamshire and when he is not working on his cars, he likes online gaming, including Sim racing.

He loves the timeless design of Japanese sports cars, and he is very interested in restoring old iconic cars to new, celebrating their unique designs without distorting them visually. It’s no surprise then, that across the UK and South Africa he has quite a vehicle collection. He owns two Evo VIIs, a Mk3 Toyota Supra, a Nissan R32 GT-R, a 350Z, and two Silvia S15s

Rainer’s top mechanical tip: never rev an engine when starting it – the oil takes a few seconds to be pumped to everywhere it needs to be, and that’s when most of the wear occurs inside an engine. “Revving the engine only increases that wear – and quite dramatically. And the car should continue to be driven sympathetically until the oil has properly warmed up and is flowing freely”, he says. Thanks Rainer, we have been warmed.

If you’d like to watch one of Rainer’s typical days at Auto Torque, then head over to YouTube here. 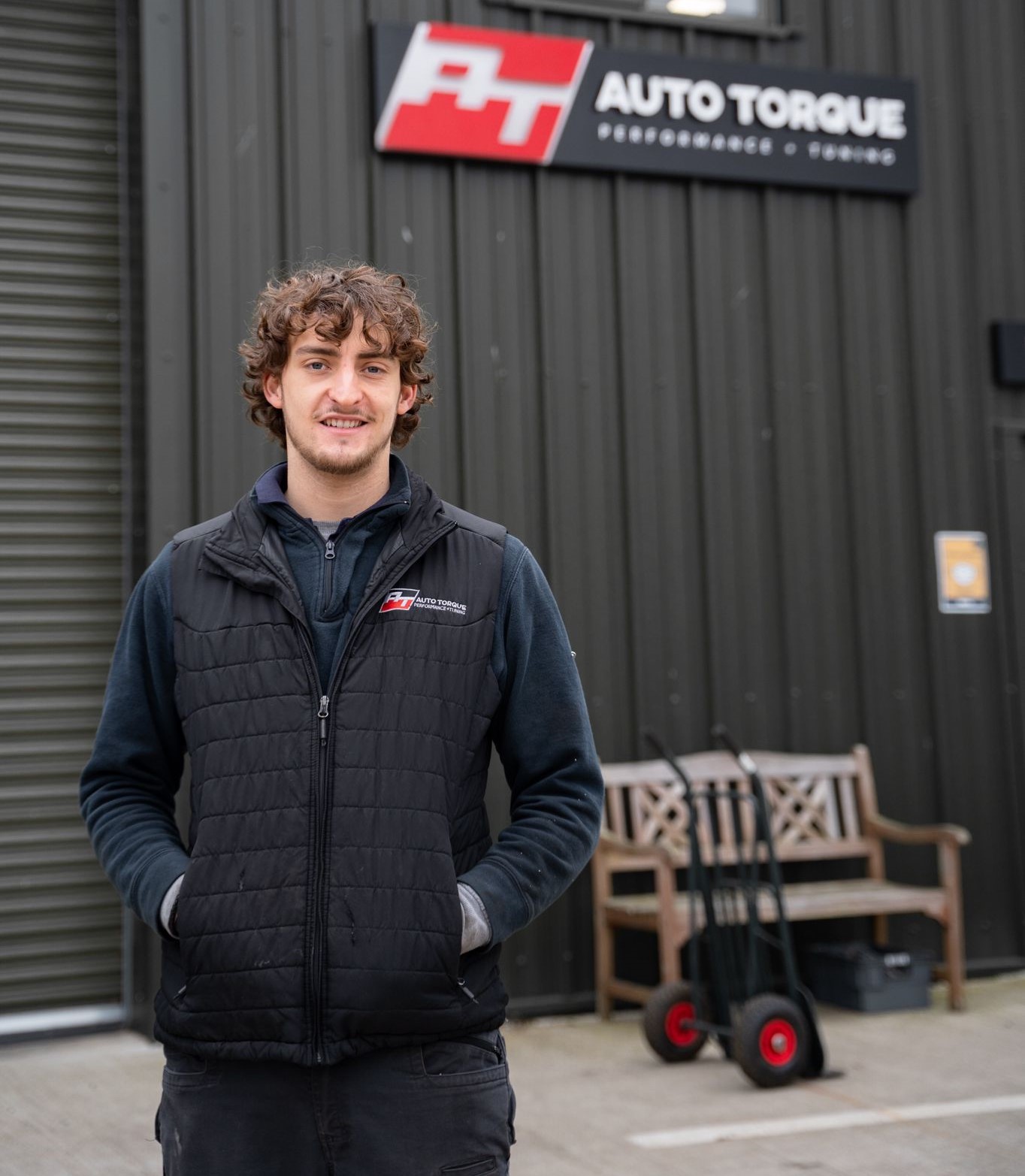 Elliott has 6 years’ experience in restoring vehicles. After studying restoration at college, he
worked on some interesting cars from Jaguar, Aston Martin, Lancia, and Porsche, focussing
on fabrication and paintwork. He has also benefitted from working on vintage vehicles
including Bugatti, which of course are often worth so much money, that there is usually no
question about the size of the restoration budget. “I was never previously a fan of vintage
cars but working on them you got to really appreciate the clever engineering of the day, for
example a Type 13 Bugatti – the first true Bugatti – 1.4 Litre 8-valve, hurtling around
Brooklands on worryingly thin wheels and tyres”.
Elliott adds that Bugatti aside – and more generally before a car gets to a certain value – it is
difficult to justify a budget of up to 2,000 hours in restoration. For modern classics then, the
type we deal with here at Auto Torque, he says it is sometimes more a labour of love.
He has also helped restore a lot of 60s-70s 911s and they are often in better condition, he
says, than Japanese vehicles 20-30 years younger; the steel they are made from appears to
be better quality too. Fortunately, new Japanese cars no longer suffer from those issues –
now being properly undersealed as part of their manufacturing process – but Elliott is quick
to point out that there remains many of the iconic Japanese sports cars manufactured
before, say 2010, which will probably require underbody attention at some point in the
future.

Elliott lives in Twyford in Buckinghamshire and has played football all his life. He is also a
rather good artist, drawing and producing watercolour portraits of animals, and the
occasional car.

So, what’s Elliott’s top tip to keep a vehicle body and chassis in the best condition? “Clean
it, protect it and store it! if people don’t clean their vehicles properly over winter, then the
salt inevitably does what it always threatens to do! The key word is wax, wax, wax! –
anything hydrophobic that will repel moisture from the chassis, supplemented with cavity
wax in the sills, the bottom of doors, and a decent wax or ceramic coating for the paintwork.
I’ve stripped down 100-year-old vintage cars which have perhaps always leaked oil from the
engine and the gearbox, and underneath is covered in a protective oil film – there is no rust
at all under all that accumulated oil! On the other hand, I’ve also seen brand new cars come
in with underside surface rust, so I would always protect a car irrespective of its age”. 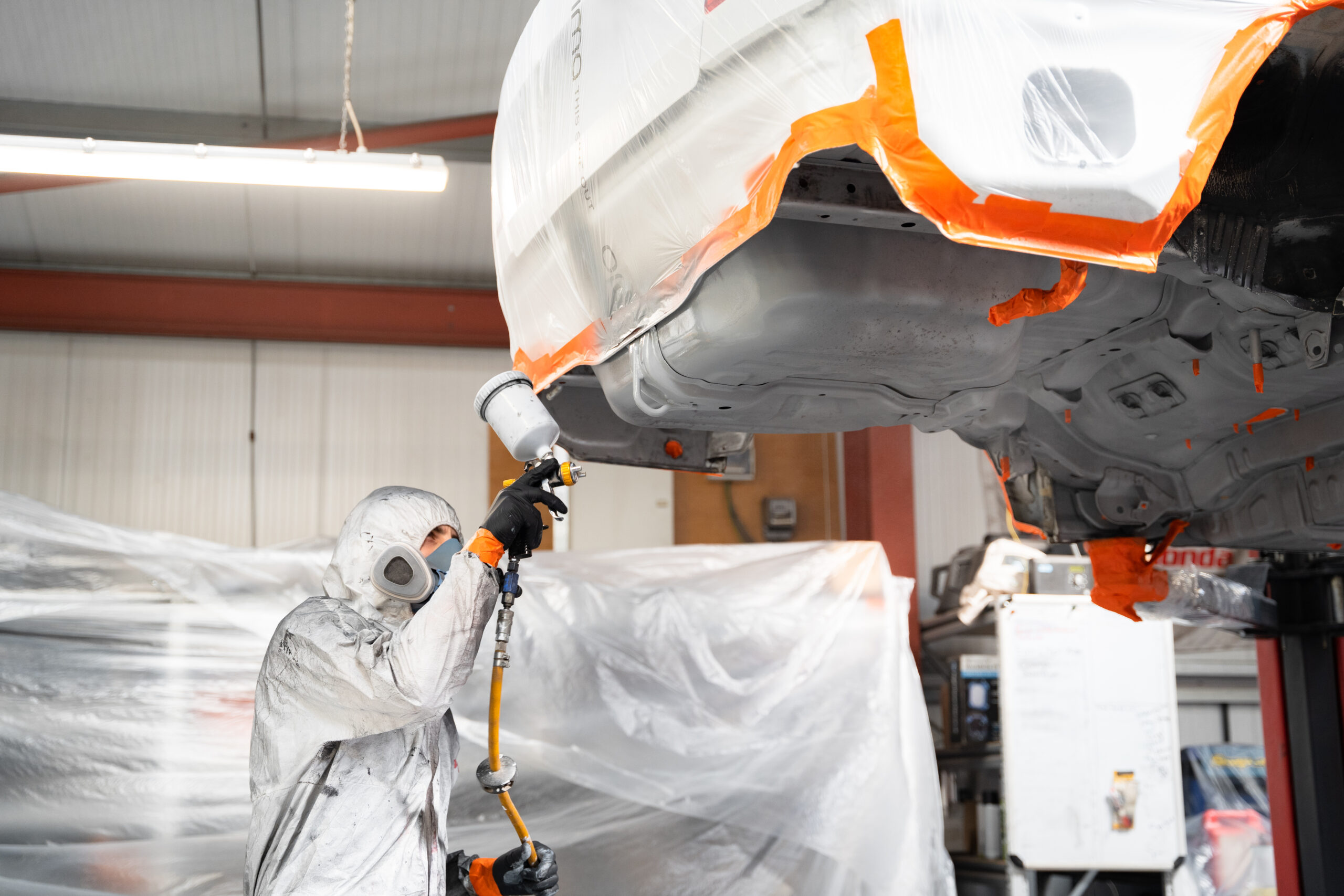 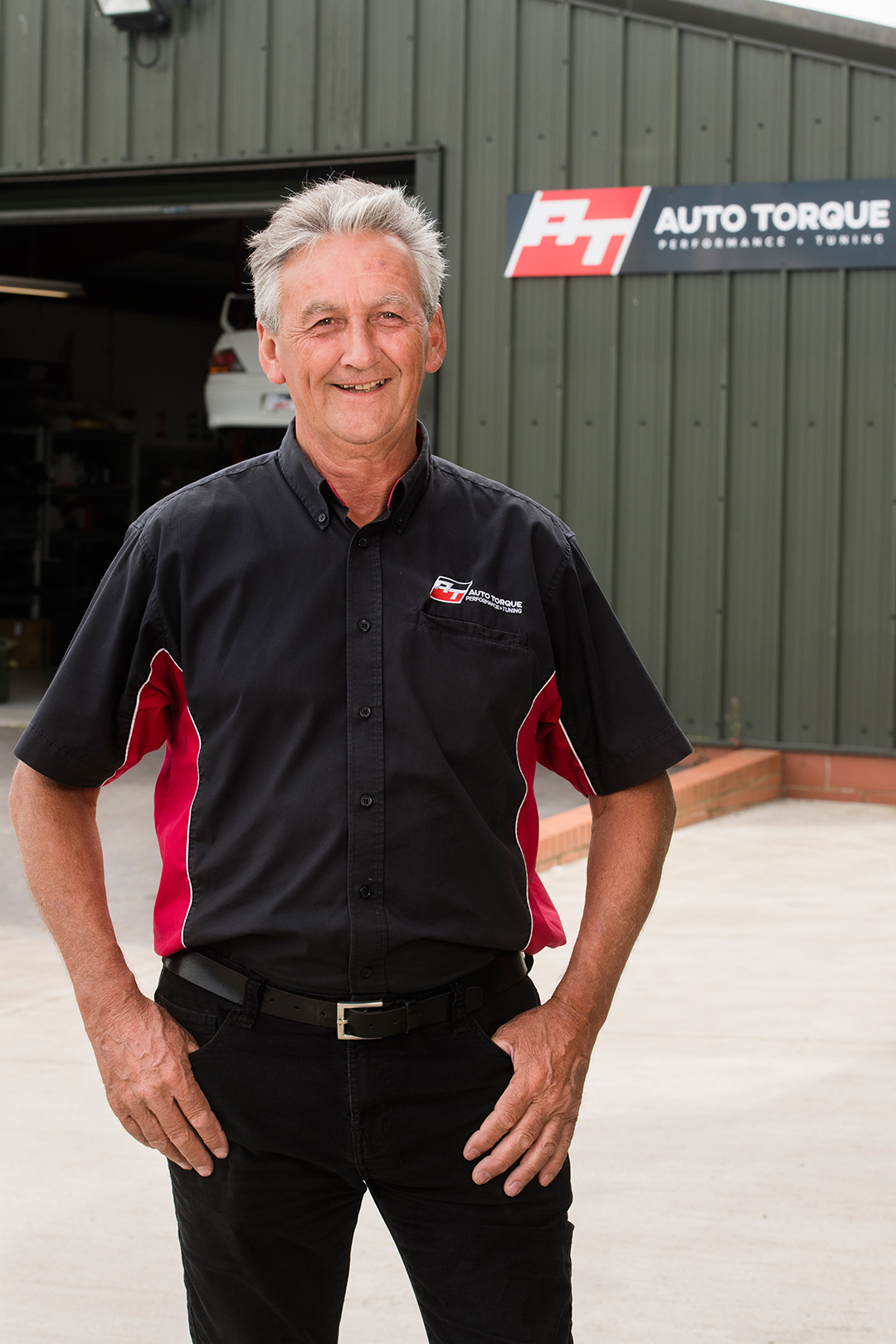 Ross is responsible for introducing Chris to cars at a young age, some twenty five years ago at the family home. Ross is our logistics operator and can be found on the roads of the UK carefully transporting all varieties of customers cars, that visit the Auto Torque workshop.

A committed grandad, Ross can be found on the sidelines supporting his Rugby mad grandson most weekends. 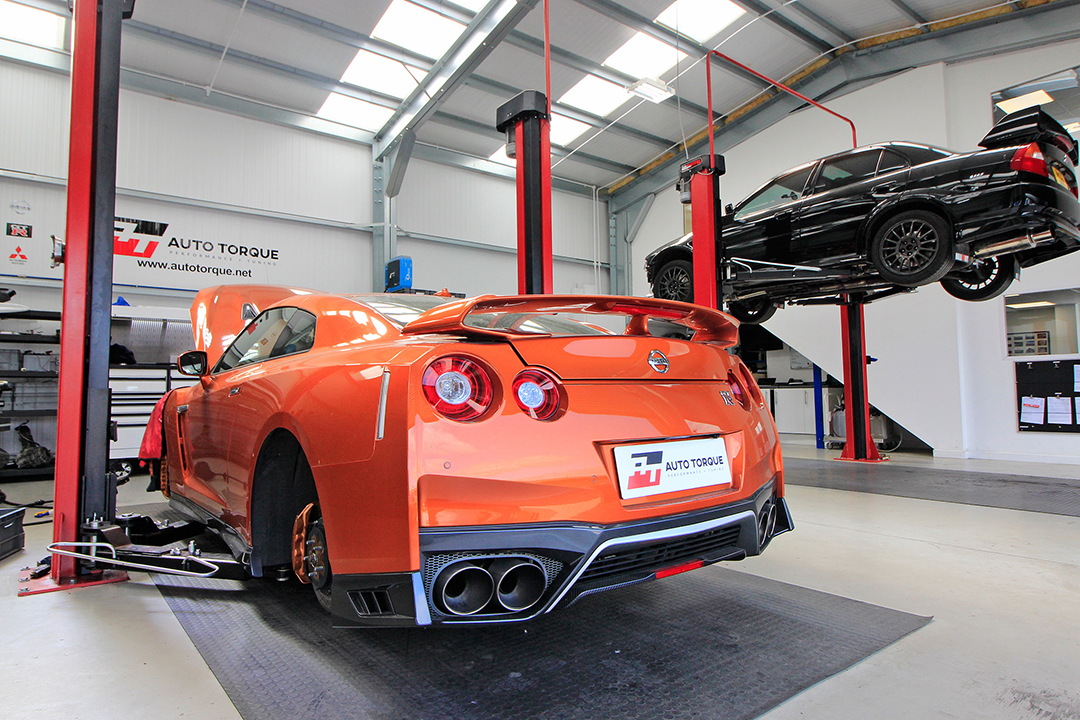 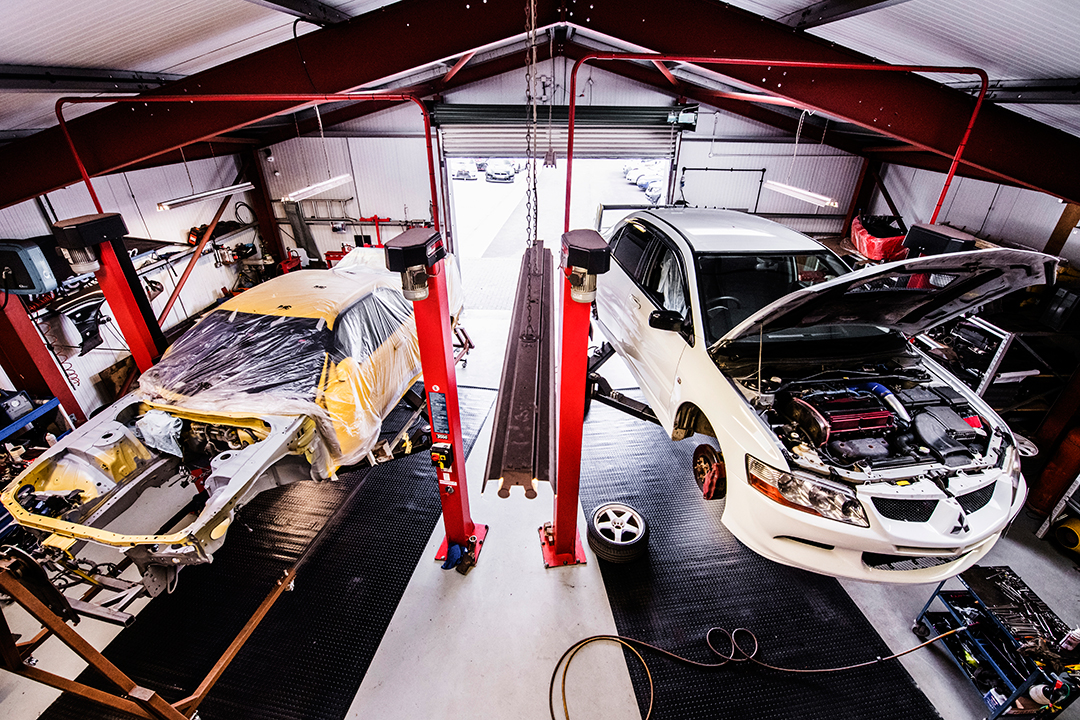 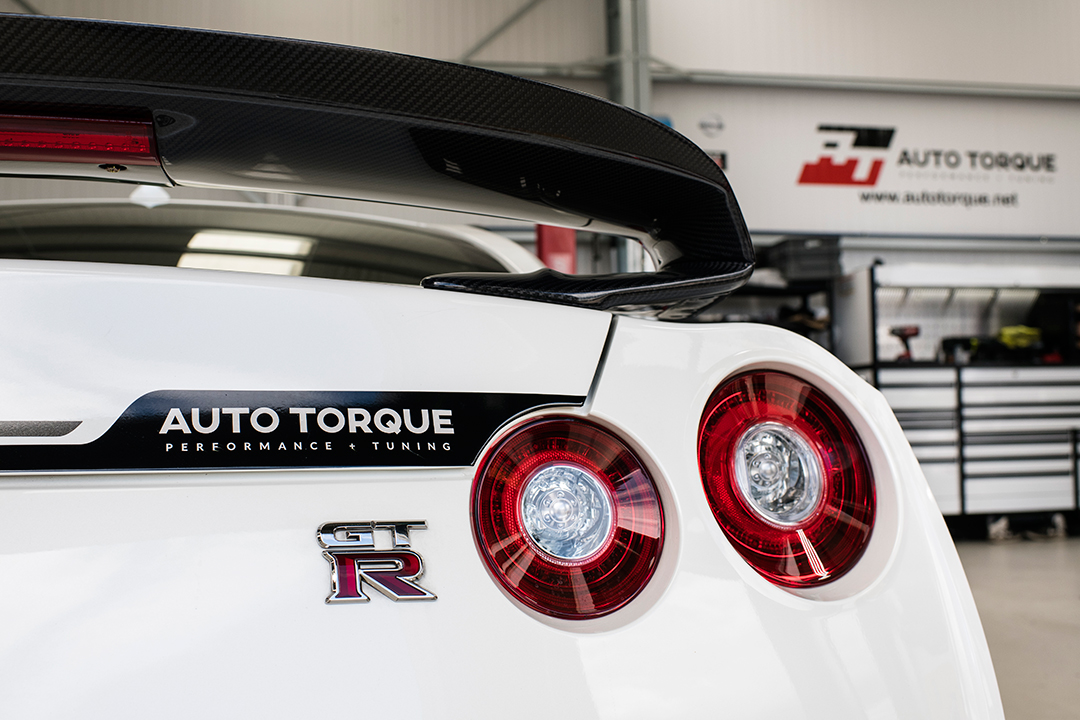